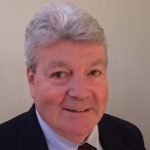 John Jorden Larkin was born in Englewood, NJ, on May 7, 1951, the son of John Joseph Jr. and Alice Jorden Larkin. He was a lifelong New Jersey resident and a graduate of Morristown Prep (now Morristown-Beard), Morristown, NJ, and Thiel College, Greenville, PA.

Until early onset Alzheimer’s prevented him, he was president of John Larkin and Co., Inc., in Denville, NJ, which installs and services production scale coffee and food production equipment in facilities across the country.

He was predeceased by his parents and by a sister, Amy Larkin.

He was a lifelong sports enthusiast, coaching his kids and their friends and playing in his last alumni soccer game in September 2013, just at the time his symptoms were beginning.

His joy was being in the middle of whatever action was going on from ski slopes to the boardwalk at Point Pleasant Beach, to dance recitals, parents nights, and backyard barbeques, whether with family, friends, or complete strangers who soon became at least friendly acquaintances. He brought laughter and fun to any activity or event or job that he participated in.

7 entries.
Sandy Sorlien
My deepest condolences to Cheryl, Debby, Cathy, and everyone else who loved John. Back in the 1970s and 80s I knew Johnny as a joyous, funny person, great to be around. As I told Deb the other day, "Such a Larkin." He will be missed but so well remembered.
john carothers
Think where man's glory most begins and ends, and saying glory was I had such friends. William Butler Yates

May you be at peace and look down on those to whom you have gifted with happiness.
Cafe Grumpy
Sending thoughts and prayers during this difficult time.
-all of us at Cafe Grumpy
TIM LARSEN
My deepest sympathies. It was a pleasure to know and work with John. He will be missed.
Sincerely,
Tim Larsen
O'Connor Family
We all are truly thankful for JJ's life.He was a one of a kind person. He not only was a great human, he was a true friend to all our family when we needed it the most. We feel lucky to have been a small part of his life. You will be missed Jj. Rest in peace dear friend.

All our love and heartfelt sympathy to all the family. May God give you strength during this time of sorrow.

Peggy, Kyle, Alex, Devin and Priscila O'connor
Lacas Coffee Company
Our deepest sympathies. We lost a key member of our coffee community.
John touched all of us.
May his memory be eternal.
Sincerely.
All of us at Lacas Coffee
WP Realty
We would like to express our heartfelt sympathy during this time of sorrow. John was a great guy and will be missed by all who were blessed to have had the opportunity to know him.

Your friends at WP Realty

Donate in Memory of John Larkin