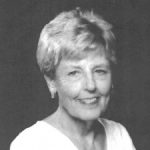 Jacqueline Ann Cole Candland, at 79, died May 24, 2019, in Salt Lake City from complications related to Alzheimer’s disease. Jackie was born in Sioux City, Iowa on August 12, 1939, to Calvert Cole and Martha Schwan Cole. Moved to Los Angeles when she was 2 years old. In Jr High, she didn’t like to wear her glasses and therefore would just say hello to everyone. She was very popular because she was so friendly. Jackie was very active in high school student government and also played in the drum and bugle corp.

After high school, she decided to go to BYU with a friend because they heard there was no drinking or smoking and that appealed to them. She joined the Church of Jesus Christ of Latter-day Saints her senior year. She was involved in her BYU social unit, the Tokalons, who’ve continued to meet every year after college. She graduated in elementary education and returned to Southern California to teach 2nd grade. Toured Europe one unforgettable summer with three other teachers. She met Bob Candland, another BYU graduate from Provo, Utah, who wooed this beauty on his little white sailboat. They were married in the Los Angeles Temple on February 5, 1966, and moved to Salt Lake City for Bob’s graduate schooling.

Jackie is survived by her husband Robert G. Candland and children Rob (Leigh), Becky (Scott) and Ryan (Anne) as well as her delightful grandchildren, Delaney, Hailey, Andrew, Lulu, Mary Jane, Lily, Seraphine, Benjamin. Preceded in death by parents and an infant baby brother Steven. She loved spending time with her family and was an amazing grandma. Loved to read and was in a wonderful book club for many years. She enjoyed visiting the natural splendor in Southern Utah, and loved the family boat trips, learning to water-ski at age 45. She could talk to anyone, making many acquaintances in the grocery store line. Loved to decorate for holidays, do crafts with her grandchildren, and was always interested in their pursuits.

She held many Church callings for which she always gave 110%. Although Alzheimer’s gradually claimed much of her memory, she continued to be a social person with a smiling face and charming personality, concerned about the welfare of others even in her care center. Special thanks to Stephanie who was a patient caregiver at her home, as well as the wonderful staff at The Ridge Foothill and also Canyon Hospice.