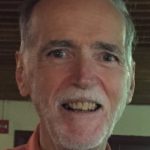 He was the fourth of eight siblings, and was 12-years-old when his family moved to New Jersey.

When he turned 19, he volunteered for the Army Security Agency and served from August 1964 – August 1968 with overseas stations in Ankara, Turkey and Cu Chi, Vietnam. He received the Army Commendation Medal (ARCOM) in 1967 and was honorably discharged in 1970.

While on leave in 1965, he met Catherine “Cathie” Anne Pascucci at a USO dance in Boston, MA. Harry was smitten from the start, Cathie took a little longer to warm to him. Their differences were stark: he was 6′ 4″, she was 5′ 0″; his family was large, Cathie had just one living sister. Nevertheless, Hank proposed marriage in 1967 and they were married a year later.

Hank was an avid mechanic and spent much time fixing and building cars and engines of all types. He had a lifelong love affair with Shelby Cobras and eventually built his own version from a kit using a Ford Mustang engine. He was also an avid and early computer engineer, who built his own terminal with a work intranet connection in 1980.

He was preceded in death by his daughter, Catie Anne Johantgen.

He is survived by his wife, Catherine Anne Johantgen, of San Angelo; his son Edward J. Johantgen, his wife Katrina M. Johantgen and their three sons, Benjamin, Nathaniel, and Ian; his daughter Julie Johantgen, her husband Kenneth W. ReCorr and their son Cole R. Lais; and his son Christopher R. Johantgen.

2 entries.
Jim kramer
Everyone at the local production facility at San Angelo were very happy and should have been when Harry decided to transfer to San Angelo, TX in the early 1990s. It was very important for the overall mission of the organization to incorporate the highest technology in sterilization to the San Angelo faculty in order to stay competitive and continue to be the leader in the suture business. Harry played a viable and critical part in the installation and operation of the New technology . Thanks to Harry he helped make the future possible at the facility. He did so much for the entire organization with his technical skills and had a very positive personality which made working with him a pleasure
Jim Kramer
Marianne Ciccone Denning
My sincere sympathy, Cathie. My mom also succumbed to Alzheimer's. Such a long, sad goodbye.

Donate in Memory of Harry Johantgen