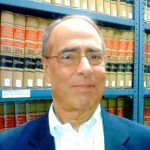 Harold Protter died peacefully in his sleep on the morning of December 28th in West Hollywood California at the age of 77.

Harold was born on December 21st, 1941 in New York City, New York to Joseph and Anne Protter. He graduated from UCONN in 1962 with a degree in business administration and from The Santa Barbara and Ventura Colleges of Law in 2015.

Harold made his career in the television industry. During his career, he was the Senior Vice President for the CW Television Network and the Warner Brothers Television Network. He worked in affiliate relations and helped bring HDTV to the United States. Harold was a former board member of the National Association of Broadcasters and a former Trustee, Chapter President, and Committee Chair of the National Academy of Television Arts and Sciences. He was inducted into the Digital Television Pioneers by the Consumer Electronics Association for his work bringing HDTV to America. He was awarded an Emmy Governor’s Award for Lifetime Achievement by the Mid-America Chapter of the National Academy of Television Arts and Sciences in.

A funeral was held on December 31st, 2018 at Shalom Memorial Park in Sylmar, CA followed by a reception at his home in Thousand Oaks. In lieu of flowers, please send donations to the Fisher Center for Alzheimers Research Foundation. The family would like to thank the staff of Silverado Memory Care, West Hollywood for their continual selfless care and kindness.

1 entry.
Gary Marshall
A really smart gentleman who loved his family and friends and technology.

Donate in Memory of Harold Protter