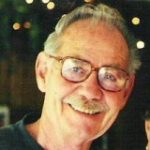 Douglas Eugene Deese Jr. (“Papa”), 84, went to be with the Lord on Tuesday, February 27th, 2018 after an 8 year battle with Alzheimer’s. Douglas was born on August 19, 1933 in San Diego, California to Douglas and Edna (Burgess) Deese. Douglas served as a Corporal in the U.S. Army from 1953-1955 and was a Korean War veteran. He married Mary Julia McVey on October 7, 1956. Douglas was a loyal employee at California Cartage Company for over 25 years. Prior to retirement, Douglas enjoyed floating around the pool and spending time with his wife and children. After he retired, he moved to Glide, Oregon with his wife. He enjoyed renovating the Oregon house, working outside on the acreage, and playing with the dogs. Douglas liked to teach his grandkids various things like how to play different card games and how to drive the tractor. Family was very important to him. He enjoyed spending time with his family, working outside, watching westerns, and drinking chocolate milkshakes. Douglas was a dedicated and loving husband, father, grandfather, and great-grandfather.

4 entries.
Armenta Family
Papa Douglas, we will remember how you lived your life, how your tenderness and kindness continue to impact our family. We are so blessed with the memories of you and the opportunity to share with our support families (Renos Labeefs, Valentins & More) those moments that still bring smiles to our hearts.
We thank our Lord God every time we remember you as a time of encouragement, honor and blessing and as a heritage of Love for family that is worth following.
To the Deese and Reno families we offer our condolences and we are honored to have been welcomed into your family.
Anne Kruse
I want to send my love and healing to all the Deeses in their time of grief. Your dad holds an icon spot in my memories of the old neighborhood in Buena Park. Your dad was a calm force, and as I recall had a dry wit that always kept me on my toes. I know the suffering this dreaded disease inflicts upon a family. Both our families lost a parent (my mom, your dad) within a year of each other. We celebrate their freedom from this life and look forward to seeing them again. Much love to all.
LaBeef Family
We remember Papa as being a quiet calm hearted guy who always took the time for other people. He helped out how he could many times quietly behind the scenes. He treated our kids as if they were his own grandkids; asking them about school, sharing stories, giving advice and helping them with homework, learning to tie a tie etc. There was a special connection that developed between Papa and Ricky one of our boys... the two of them had this quiet unspoken understanding & would talk, watch shows together & just hangout. Ironically I now know that they shared Eugene as their middle name and really did have a connection! Our family, our kids will miss Papa very much.

We send our love and condolences to his family.
Christine Middletonmcvey
The thing I remember about Doug is his smile.He had the biggest smile you ever saw and he smiled all the time.The next thing I remember is the way he loved his family and my sister Judy .He took such good care of her especally when she got sick with cancer.Sadly i didn't get to spend any time with him as he got older but his daughter Debi took really good care of him. RIP Douglas Deese, give my sister Judy a hug and kiss for me

Donate in Memory of Douglas Deese