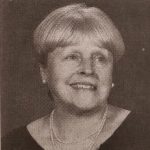 Carol was born on January 30, 1935 in Charleston, SC the daughter of James F. Baxter and Cecelia Catherine Canning. When she was eight years old the Baxters’ moved to Providence, RI where she attended Holy Name School and St. Xavier’s Academy. Carol later graduated from Annhurst College, South Woodstock, Conn in 1957.

In 1960 Carol married Colonel Noel J. Doyle, Jr., US Army, Retired. As an Army wife she accompanied her husband on military assignments in Maryland, California, Kansas, Virginia, Germany, and Prague, CZ. During these tours she excelled in a variety of work professions notably as an elementary school teacher (including at the international level) and in real estate sales.

A Mass of Christian burial was held on Thursday, September 12, 2019 at 10 a.m. St. John the Apostle Catholic Church, 101 Oakcrest Manor Drive, NE, Leesburg, VA. Interment to be held at a later date at Arlington National Cemetery.

Donate in Memory of Carolyn Doyle