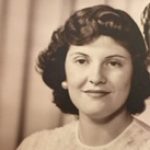 Bobbie Jean Maida, nee Marsh was born on July 21, 1931, during a thunderstorm in Lake Charles, LA., maybe this was the reason for her love of stormy weather; so it was fitting that she was called Home on May 20, 2019 during a rain storm.

Bobbie fought the battle of Alzheimer’s from 2009 until 2019. Five of those years were undiagnosed, the last five spent in Memory Care. Her family was blessed that she never forgot who we were just who she was.

As her daughter I want to make sure she is Remembered for who she truly was, a woman that was ahead of her time, seeking career over homemaker, an introvert that stood out in the crowd, a fiercely private soul, that had a kind heart, but never wanted others to know her generous actions and a wicked sense of trickery. She loved the beach but was terrified of the water, nothing made her happier than ice cream in summer.

Our Mama, will be remembered always by her daughter, Cheryl Vamvakidis, and her son, Scott Heiman. Nana to her grandchildren, Jarrett Vamvakidis and Katy Heiman. Her mother Katy Bell Marsh and father Edison Dewy Marsh greeted her in Heaven.

“To live in the Hearts left Behind is Never to Die”

You were a bright light in our family and will be remembered as such. Kind behind doors and a powerful force in public.

But I will remember the pranks and jokes, the smiles no matter what and the catching of as many lizards as possible. I love you always and forever Nana, you will be remembered and honored!