Vitamin D and Your Brain

Forgot where you placed your keys? Can’t remember your new neighbor’s name? Wondering where you parked your car? If memory lapses have you fretting about your brain health, you may need more vitamin D. A growing body of research suggests that the sunshine vitamin is involved in cognitive function. Among the findings:

“Overall, we are learning more and more about the benefits of vitamin D,” says Sharon Brangman, MD, a geriatrician and professor of medicine at Upstate Medical University in Syracuse, N.Y. “It is the only vitamin that can reduce the risk of falls when it’s replaced in people who are deficient, and there is emerging research that it is also important for brain health.”

D for Discerning
Exactly how vitamin D functions to preserve cognitive function is unclear, Brangman says. “It may increase acetylcholine, a brain chemical and neurotransmitter important for memory and other brain functions, that is found in low levels in many patients with dementia,” she says. “Current drugs for treating Alzheimer’s disease, the acetylcholinesterase inhibitors, work to increase the amount of acetylcholine in the brain. Vitamin D may also help nerve cells grow by increasing levels of nerve growth factor. The information transmitted by the nerve cells in the brain is the foundation of everything our brains do, including memory, decision-making, judgment and complex thinking.”

Vitamin D is a fat-soluble vitamin best known for its role in bone health because it aids in the absorption of calcium. Vitamin D also plays a critical role in cell growth, immune function, and the formation and development of the brain. 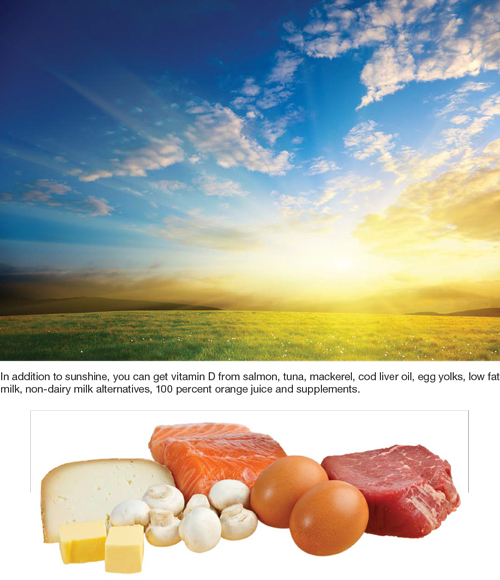 “There is wide distribution of vitamin D receptors throughout the brain,” says Joy Dubost, PhD, RD, a spokesperson for the Academy of Nutrition and Dietetics. “The presence of vitamin D receptors in the brain implies it may have some effect on the function of the brain. Some scientists have tentatively classified vitamin D as a neurosteroid. Research has also shown that vitamin D affects proteins in the brain that are involved in learning, memory and motor control.”

Still, experts agree that more research is needed before declaring a direct link between vitamin D and cognitive function.

The Rx for Now
In the meantime, it’s important to get enough vitamin D in your diet. The amount you need varies by age and depends on whom you ask. “Scientists and other public health organizations are debating the amount that should be recommended based on recent studies indicating the benefits of vitamin D,” Dubost says. The National Osteoporosis Foundation, for instance, recommends 400 International Units (IU, equivalent to 0.01 mg) to 800 IU (0.02 mg) of vitamin D daily for adults under age 50, and 800 IU to 1000 IU (0.25 mg) for older adults.

An important source of vitamin D is sunshine. The body makes vitamin D when the skin is exposed to the sun. Dubost recommends sensible sun exposure, which she describes as five to ten minutes two or three days a week. This will vary depending on the season and where you live (latitude).

Getting vitamin D from food isn’t easy since few foods contain it naturally. Some exceptions include oily fish— salmon, tuna and mackerel—cod liver oil and egg yolks. (See recipe on the next page.) Fortified foods like low fat milk, non-dairy milk alternatives, and 100 percent orange juice are healthy options, too. You can also get vitamin D from supplements (also called vitamin D3).

“Vitamin D supplements may be necessary for older people, those who do not consume adequate amounts through their diet, people living in northern latitudes, and for dark-skinned people who need increased exposure to the sun,” Dubost says. “You may want to have your doctor test your vitamin D level in your blood to ensure you have adequate amounts, which could then determine how much vitamin D you may need to receive through diet and supplements.” 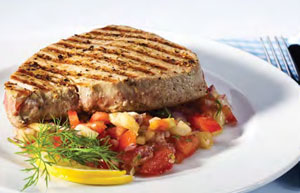 Directions
1. Rinse the fish and pat it dry with paper towels. Place it in a glass pie plate and drizzle with olive oil and lemon juice. Let the fish marinate in the refrigerator for at least 15 minutes and up to 4 hours.

2. P reheat grill. Place the tuna on a double-thick sheet of aluminum foil that has been sprayed with the cooking spray; place it on the grill. Grill the fish, turning it once, until it flakes and is not quite opaque in the center. This takes between 4 and 8 minutes per side, depending on the thickness of the fish.

3. Preheat oven to 400ºF. Combine the remaining 2 teaspoons of olive oil, the chopped onion, and the garlic in a glass, oven-safe pie plate. Bake for 7 to 8 minutes, stirring halfway through. Mix the salt into the tomatoes; stir the tomatoes into the onion mixture and continue to roast for 4 to 5 minutes, until the tomatoes are warmed and the onion is starting to brown. Remove from the oven, stir in the chopped parsley and capers, if using. Spoon the mixture evenly over the grilled tuna steaks. Add the desired amount of black pepper.

Source: Academy of Nutrition and Dietetics