Now is the best time to plan for the distribution of your wealth, and a will is one important tool for doing just that. 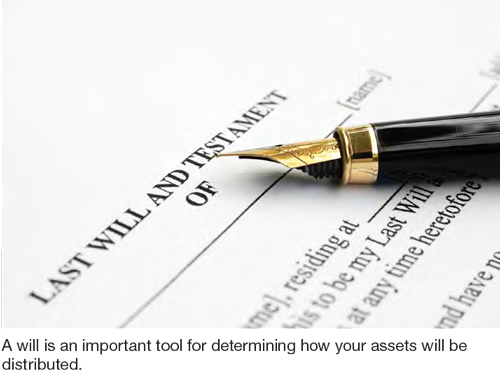 After we pass, we leave behind our worldly effects—all of our assets and belongings, as well as our debts. If you’re an older person, you should have a plan for how your finances will be handled up until and after your death, and crafting that plan requires far more than just writing a will.

“You’re talking about the disposition of a lifetime of accumulated wealth,” says Dana B. Perry, Shareholder and Certified Elder Law Attorney with Chambliss, Bahner & Stophel, P.C., in Chattanooga, Tenn. “And the will is the last layer of designating how that wealth will be managed after your death,” says Perry, “while many people think it’s the first.”

Where to Begin
A will establishes in advance how you want your assets and belongings handled when you’re gone. It also designates an executor who will oversee the disbursement of your estate. However, the will only applies to property that does not already have a beneficiary. Insurance policies, retirement accounts, and joint accounts designate a beneficiary or joint owner, which overrules anything in the will. Before you walk into a law office, take an inventory of your assets, both the types and their beneficiaries or joint owners.

Harold L. Grodberg, a Certified Elder Law Attorney, also encourages you to consider the second level of heirs, in case your children predecease you. “If you die without heirs, the law says who’s going to get the assets,” says Grodberg.

Trusts You Can Trust
Grodberg also takes stock of potential complications. Are any of your heirs incapacitated? Are they spendthrifts? Are they minors or impulsive young adults? In these cases, a lump sum inheritance could cause problems for heirs who are ill equipped to handle the responsibility.

Likewise, second marriages can create conflict after you’re gone. For instance, a surviving spouse may decide to rewrite her will to exclude children and grandchildren from a previous marriage. In all of these cases, Perry says, “A trust is an underutilized tool for preventing your heirs from using your hard-earned money against your wishes.”

A trust puts someone else in charge of your money and allows controls to be put when funds become available, on how they can be used. In the case of a second marriage, you can place the money in a trust where your surviving spouse can access it but cannot change who inherits it when she dies. Be open to your attorney’s suggestions about how to structure your plan.

Of Sound Mind
When someone is diagnosed with dementia, amending an existing legal arrangement or setting up a new one can further complicate matters. And here, reasonable attorneys can disagree on a course of action. In such cases, Perry seeks a letter from a gerontologist or neurological specialist that states that her client is of sound mind. If someone with cognitive
issues—or even just a person in their 80s—wants to write out members of their family, that presents a heightened level of scrutiny. The letter, in Perry’s view, helps to make the will immune to challenge. However, “if there was a case where a doctor was not willing to give a letter, it likely would prompt me to consider whether the client should be executing another will,” she says. 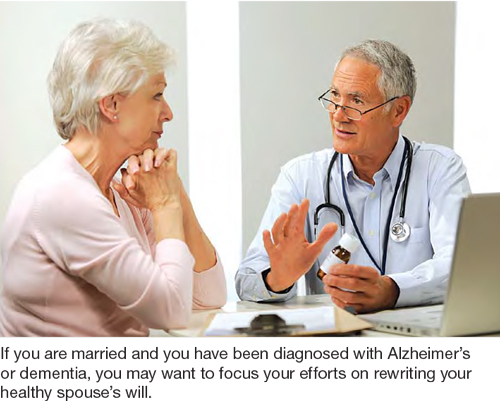 Grodberg disagrees. He believes such a letter opens the will to challenge. He believes that incapacity is a legal issue, rather than a medical one, and “until a person is adjudicated as an incapacitated person, they have capacity,” he says. Instead, Grodberg prefers to write a memo to the file of his own evaluation of his client’s competence, that he met with his client, they had a conversation that was coherent, and the next day the client remembered what was said. Either way, both attorneys caution that major changes to your estate at this point in your life can rankle your heirs, and you should consider whether your choices will leave a legacy of conflict.

After a Diagnosis
If you are married and you have been diagnosed with Alzheimer’s or dementia, Grodberg focuses his efforts on rewriting the healthy spouse’s will. The spouse who is suffering will most likely divest their assets and put them in the healthy person’s name. For the healthy spouse, the ailing spouse will no longer be the entire heir. Instead, Grodberg advises establishing a trust that leaves one- third to the incapacitated spouse and two-thirds to the next person. In some states, this arrangement could help the incapacitated spouse become eligible for Medicaid assistance, and/or it can ensure that the incapacitated spouse has the funds for medical needs. Keep in mind, having Alzheimer’s, especially early stages, does not mean you cannot do a will. A will requires the lowest form of capacity of any legal document.

Communicate Your Wishes
Work toward simplifying and streamlining your financial situation. Organize your forms and files in one place, and aggregate your investments into one or just a few accounts if possible. Leave a letter of instruction with your heirs that details your wishes for a funeral and points them to the will and other important documents. Keep your will in a fireproof box or cabinet—and make sure someone knows the combination. Or, better yet, have your attorney hold your will. Most attorneys do not charge for this service. In many states if you lose your will and die, you are deemed to have revoked it, but not so if your attorney was in possession of it.

Where possible, communicate your wishes to your heirs with the aim of minimizing disagreements. If you are a child managing a parent’s estate, try to coordinate the discussion of your parent’s finances with the whole family present, and as you enter the process, Perry says, “You need to be open to your parents’ wishes and be prepared to let the process go where it will.”

The Right Lawyer
Managing your estate in your twilight years is vastly different from writing a will in your 40s or 50s. An elder law attorney has the specialized experience to anticipate your needs and to minimize your estate’s and your heirs’ tax liabilities. Additionally, laws differ state by state and year to year. You’ll need to reassess your affairs at least every three to five years, if not yearly. A trusted lawyer—and executor—can help you manage the process so that all of your hard work continues to benefit the right people, even after you’re gone.

Get Your Copy Now

Subscribe to our magazine for renewed hope and understanding.