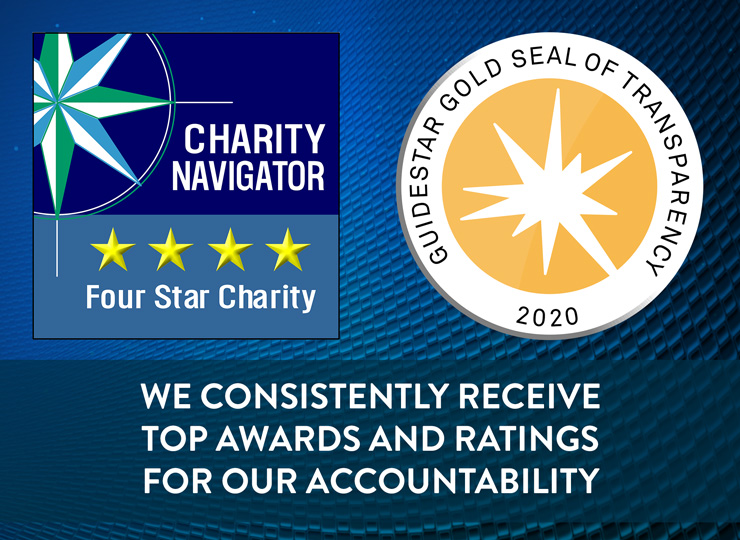 The Fisher Center for Alzheimer’s Research Foundation
Earns Honors from Charity Navigator and GuideStar,
and the Health Information Resources Center

New York, NY, June 2020 — The Fisher Center for Alzheimer’s Research Foundation has once again earned the highest rating from Charity Navigator, as well as GuideStar’s Gold Seal of Transparency. Most recently, they received a merit award in the Web-based Digital Health Website category of the Spring 2020 Digital Health Awards by the Health Information Resources Center (HIRC).

This year marks the ninth consecutive 4-star rating from Charity Navigator, America’s largest independent charity evaluator. Evaluations are based on two key categories of operations, scoring each charity on seven key areas of Financial Health, and using information from seventeen different metrics to assess the charity’s Accountability & Transparency. A four star rating, the highest available, indicates that the charity “exceeds industry standards and outperforms most charities in its cause.”

In addition, GuideStar, the world’s largest source of information on nonprofit organizations, awarded the Fisher Center Foundation their prestigious Gold Seal of Transparency. GuideStar’s Seals recognize those charities that show commitment to transparency by providing current information regarding mission, leadership team, financials, and more, allowing donors and funders to make educated decisions about the organizations to which they donate. Less than 5% of the 1.8 million organizations registered with GuideStar have been recognized with a Gold Seal.

The Fisher Center Foundation’s website, ALZInfo.org, was recognized by the HIRC, which awards organizations that produce high-quality digital health resources for consumers and health professionals. Entries are judged on “content, format, success in reaching the targeted health audience and overall quality.” The Center has received this prestigious award each year since 2004.

“We are so honored. These awards exemplify our commitment to transparency, accountability, and overall excellence; our donors and benefactors deserve nothing less,” said Lucretia Holden, Executive Director of the Fisher Center Foundation.

The Fisher Center for Alzheimer’s Disease Research Laboratory is one of the largest and most modern scientific facilities in the world dedicated to solving the puzzle of Alzheimer’s disease.

Our mission is to understand the causes of Alzheimer’s disease, improve the care of people living with it, and find a cure.

Our vision is working towards a future where Alzheimer’s is nothing but a memory.

For more information about the Fisher Center Foundation, and how to support breakthrough research, please visit www.alzinfo.org.