Stowing the roll-aboard, for now 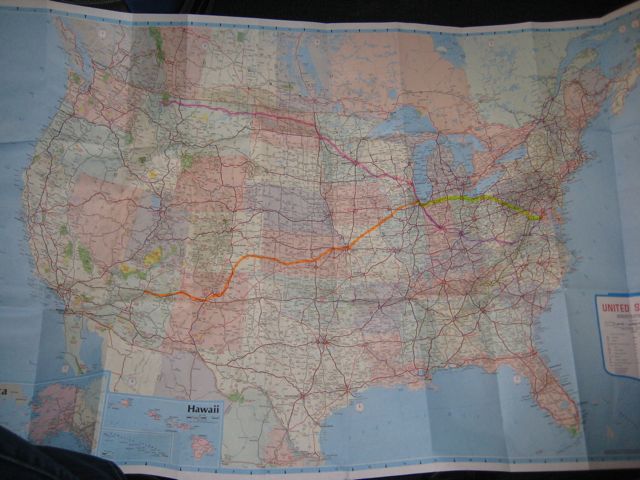 I am struggling to append the expected “why not” explanation to the above declaration, and I find myself grasping at threads which, though real, lack the substance that we humans usually prefer when ascribing reasons to significant life decisions.

I could get him on a train again. In April (as I foreshadowed in an earlier post,) Jeff, Mom, and I jumped the Empire Builder and rode it from Chicago to Whitefish, Montana. Well, okay. We didn’t exactly “jump.” (Though that conjured up a fun boxcar image, didn’t it?) Actually, the Amtrak Empire Builder doesn’t even tow boxcars. We were in Superliner sleeper compartments with our own minuscule potty-showers, and a lovely dining car five cars ahead of us.

And therein lay one of the concrete issues with which I’d prefer not to tangle again—the part about the dining car being five cars ahead. The trick, when moving through rolling, pitching cars on a moving train, is to maintain enough momentum that your forward motion at least partially offsets your tendency to lurch laterally into the laps of the people seated on either side of the aisle.

Well, if Jeff moves that fast, his velocity exceeds the speed at which he can process the visual data and bad things follow. Instead, I must grasp his wrist firmly and tug him along behind me. The hand on him must keep him upright, while keeping me upright falls to the hand that’s left over. After a meal or two, Mom and I found that our best strategy was to hurry, as quickly as we could shuffle, to the lounge car while the train was momentarily at a station, thus reducing by half the amount of lurching and balancing required to arrive for the next meal.

As you might also imagine, minding the gap was a matter that required special attention each and every time we boarded or disembarked.

Unless you’ve never flown I don’t even need to talk about managing airport security with a person who is cognitively impaired. By the time we’ve removed our shoes, placed all liquids in a ziploc bag, and emptied our pockets of everything vaguely metallic or electronic, we’re ALL cognitively impaired, and I won’t even go there. But a special surprise awaited us in Salt Lake City, where tornadoes in Georgia had delayed the plane we were meant to get on next. The surprise was a six hour layover.

And then something wonderful happened. It turned out that my mother had a special fancy credit card, that gained us admittance to the ever-so-nice Delta Sky Club lounge, where snacks, clean bathrooms, and a restful atmosphere afforded us refuge from the dissonance of the airport-at-large. So I can’t complain, this time. And there will not be a next time if I can help it. Not with Jeff.

Which brings me back to “why.” We managed. All went relatively smoothly. We had an enjoyable trip, given the extra layers of hassle and strategy needed to travel with a dysfunctional loved one. But the real “why” of it has to do with me, Jeff’s current disability level, and how hard it’s becoming, motivationally speaking, to roll a big ball solo.

He’s dipped below the critical level. The critical level being the amount of enthusiasm and comprehension he is able to bring to the endeavor of travel. While I suppose he will remain a gentle, cooperative soul ‘til the end of his days, being constantly responsible for getting him from point A to point B chafes at my emotions. And my hand, constantly on his arm pulling him this way or that, chafes at his.

So, for want of a truckload of powdered cornstarch to sprinkle liberally over any future expedition (to prevent chafing,) I am inclined to close the book on travels with Jeff, apart from the automobile-based “must-dos.” There’s a reason Barnes & Noble has no special shelf for Alzheimer travelogs.