Out of the mouth of babe’s 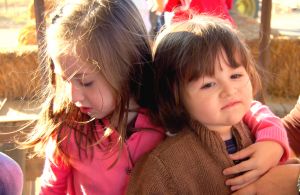 Hiya all, just had to tell you all this. As we arrived at the holiday camp, Elaine was very busy putting things away in the holiday home (Caravan) whilst I was in the front room with my grandchildren, Brionie aged…12yrs and Colby aged 9yrs when Colby asked a question, the conversation went something like this:

“Grandad, what’s wrong with you??” “He’s got Alzheimer’s,” replied Brionie, “What’s Alzheimer’s?” asked Colby. “Well,” said Brionie, “it’s when you start to forget things and remember things, isn’t it Grandad?” “Yes it is darling,” I replied whilst looking at Colby with interest as I knew this question would be coming very soon from him.
“RUBBISH!!!!!” Colby shouted at Brionie as if I wasn’t there,” Grandad remembers tons of stuff about when he was younger and teaches us all sorts of things about growing up and stuff!!! How can you say he forgets things? He told us lots of things coming here in the car and every time I ask him something and he answers it for me, I always say “How do you know that Grandad? And he (me) always says “I’m your grandad, it’s my job to know!!” LOL LOL

“But its true isn’t it grandad, that’s what Alzheimer’s is, isn’t it??” (Believe it or not she has read my book!!)

So the next ten minutes I had to explain to a very confused nine year old who loves his grandad very much that now and again I might just forget a few things in the future and might not know as many answers as I usually do. He was visibly crestfallen and looking a little jaded. As their Nanna (Elaine) shouted to them, Colby turned round to me and asked “Grandad, who was the first man on the moon?” “Neil Armstrong!!” I answered quickly!! “SEE!!” shouted Colby to his big sister, “I told you he was only joking as usual!!” LOL

So maybe I will wait until he is a bit older before I try explain it to him again, in the meantime who am I to destroy his dream? I am sure I can muddle through a little bit longer, and by then they may have a cure, and the thought of his Grandad forgetting anything will be soon forgotten by him……………………………..Hopefully xxxxxxxxxxxxxxxxxxxxxxxx