A Penny for Her Thoughts

An Interview with Penny Marshall

Many know her as the spunky Laverne DeFazio of Laverne & Shirley fame. Others know her as the award-winning director who worked magic on films such as A League of Their Own, The Preacher’s Wife, Awakenings, and Big, which was the first female-directed movie to gross over $100 million at the U.S. box office. What many people don’t know about Penny Marshall is she, like many others, is the child of a parent who developed Alzheimer’s. Her mother, Marjorie Marshall, died of the disease in 1983. Penny’s memoir, My Mother Was Nuts, gives a humorous and brutally honest look at the relationship the two shared and how Penny went from dancing in the basement to calling the shots on the big screen. We talked with Penny about her mom’s experience, her own health issues, and how her mother’s memory will live on—even after Alzheimer’s.

Preserving Your Memory: Obviously, people will wonder about the title of your memoir. Why did you choose that title?

Penny Marshall: Because my mother was nuts. Not because of Alzheimer’s, but before that. She said some of the weirdest and harshest things. She had a love for teaching dance. She wanted to be a dancer, but in the period when she grew up that wasn’t something you did. So she taught dance to everyone. She thought it was very important that everyone got the chance to see what it’s like to entertain, I did tap dance mostly, but she taught ballet, acrobatics, and jazz. She always compared me to the 360 kids she taught in the basement of our building. However, she wasn’t a stage mother. She was just pushy.

Preserving Your Memory: You describe her as being obsessed with her work as a dance teacher.

Penny Marshall: She wasn’t only obsessive about teaching dance; she was obsessive with dancing itself. That’s all she liked to do. She tapped all around the house. She’d tap dance around the kitchen when she was eating or cooking, tapping on the linoleum. It’s what she lived for. We’d hear that tapping noise all day long.

Preserving Your Memory: She hoped you would follow her dancing footsteps. Were you a good dancer?

Penny Marshall: I was good at it, but I didn’t like it. Especially as I got older, I was a little boy crazy. I wanted to hang out with the boys, and I didn’t care about dancing school. But we did every benefit there was, whether it was for arthritis, the March of Dimes, Army camps, veteran’s hospitals… Wherever they would feed us, we went. We were three- time winners on the Ted Mack’s Original Amateur Hour; we were on The Jackie Gleason Show. We did everything.

Preserving Your Memory: How did you go from dancing to acting and directing?

Penny Marshall: I didn’t want to be in show business, but I had sort of been in it already. I didn’t call it show business; to me, it was just my mother’s weirdness. After I got divorced, I moved to California. My brother [producer Garry Marshall] lived there, and he helped me land a few small acting roles. Then he asked if Cindy [Williams] and I wanted to play the role of two “fast girls” on Happy Days. Those roles led to the spinoff Laverne & Shirley. Later on, I had directed a few Laverne & Shirley episodes and was then asked to take over directing the movie Jumpin’ Jack Flash [starring Whoopi Goldberg]. Then came Big …

Preserving Your Memory: Can you tell me a bit about your mom’s first signs of Alzheimer’s?

Preserving Your Memory: In your memoir, you say, “her feistiness was turning into forgetfulness.”

Penny Marshall: Yes, because when we were kids, she would call us different names, and that was before the Alzheimer’s. She would make up names for all of us. That was just her. She would say, “Well, don’t you get tired of being called the same name?” So with the onset of whatever it was, because they didn’t know what it was back then, we weren’t sure whether she got forgetful or it was just part of her “thing.”

Preserving Your Memory: Tell me about the official diagnosis. What was your reaction?

Penny Marshall: The doctors said, “It’s dementia,” because that’s all they knew back then. It was like, “well everyone gets that as they get older.” But it was shocking because she wasn’t even old. She was in her 60s or 70s. She was still running around.

Preserving Your Memory: What were some of the challenges your family faced with the Alzheimer’s?

Penny Marshall: They had to take her car keys away because she couldn’t remember where she lived. She’d take the bus and not know where to get off. One time the police picked her up and took her to the jail. She was telling them stories of when she was younger and of her dancing school. It’s weird. She could remember everything about music, the dancing school, and all that, but she couldn’t remember present day. When her memory got worse, we eventually had to have someone come in for 24-hour care. She would watch TV and laugh. We felt as long as she was still laughing, it was worthwhile. For the last two years, it was terrible because she was in more like a vegetative state. She had been such an active and lively woman, so that was the hardest part.

Preserving Your Memory: Your mom’s battle with Alzheimer’s had a lot to do with your decision to direct Awakenings, correct?

Penny Marshall: Well, I read the script, and it read like a medical mystery to me. It was about four people who were in a comatose state, and because of my mom’s Alzheimer’s, you wonder if they hear you. And I think it’s important to treat them like human beings, instead of just letting them waste away in a corner. So it did affect my feelings toward the movie. I thought it was a great script, but part of my reason for doing it was because of my mother. 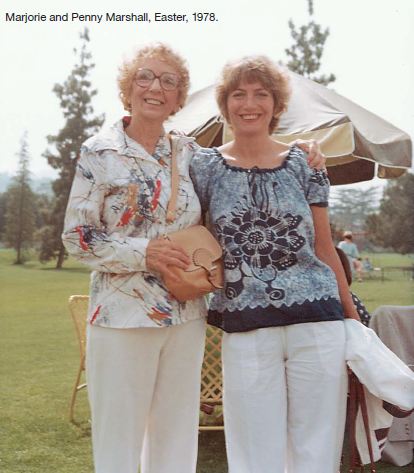 Preserving Your Memory: You and your siblings built a dance theater in her honor?

Penny Marshall: At Northwestern University where my brother and sister went to college. We built the Marjorie Ward Marshall Dance Center. She was still alive for the groundbreaking and my brother tried to explain we were doing it because they didn’t have a dance facility at the school.

Preserving Your Memory: The relationship between you two was sometimes rocky. Now that you’re older and have a daughter of your own, what were some of your mom’s strengths that you didn’t recognize when you were younger?

Preserving Your Memory: It sounds like she was a short order cook.

Penny Marshall: Yeah. And she dropped the turkey on the floor all the time. But she could make a good turkey. She made stuff that we still talk about today because we liked it.

Preserving Your Memory: Many people whose parents developed Alzheimer’s worry about their own memory. It seems yours is very good. For this book, you turned on a tape recorder, talked about your memories and then had it transcribed?

Penny Marshall: Transcribed, and then fixed some of what was transcribed. But I am getting like my ma in that I don’t know what I did yesterday. I know I was eating potato chips. Other than that, I can’t really remember. But I do remember everything from back in the days.

Preserving Your Memory: You were treated for lung and brain cancer a few years ago. How is your health now?

Penny Marshall: I’m fine. I’m clean. I go when I’m supposed to go for the PET, CAT, and MRI scans. I eat better.

Preserving Your Memory: Any advice you would give to others who have had a loved one diagnosed with the disease?

Penny Marshall: It’s a terrible disease, and I wouldn’t wish it on anyone. It’s a bummer, but you have to try to do the best you can. Just try to keep going even though they’re not the same at times. Keep trying to do what they like, whatever it is. Try your best to help them keep smiling and laughing.