News from the Fisher Center for Alzheimer’s Research 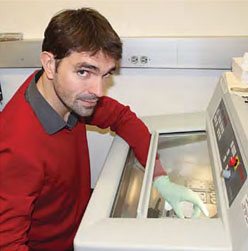 Preserving Your Memory talked to Dr. Jean-Pierre Roussarie, postdoctoral associate at the Fisher Center for Alzheimer’s Disease Research Laboratory, about the work they are doing there now.

Preserving Your Memory:
Please tell me about the research you’re currently doing in Dr. Greengard’s lab. What is the nature of the research? What are you targeting?

PYM:
If you had to sum up your work in a few sentences, what would you say?

Dr. Roussarie:
It is clearly not the whole brain that is affected by AD. At early stages, only regions involved in the formation of new memories stop functioning while the rest of the brain remains normal. To understand why these regions are particularly vulnerable, we are comparing all the proteins present in vulnerable regions to those present in resistant regions so that we can pinpoint proteins that cause the vulnerability and proteins that cause resistance.

PYM:
What have you learned thus far from your research?

Dr. Roussarie:
We have made a lot of progress. We were able to identify a very small number of proteins that are present only in vulnerable regions and not in resistant regions, as well as proteins present in resistant regions but not in vulnerable regions. We are now investigating whether these proteins indeed play a major role in causing vulnerability or resistance. We have two approaches. The genetic approach, for which we are collaborating with the renowned Alzheimer’s geneticist Rudy Tanzi, is to learn if Alzheimer’s patients have mutations in any of the proteins we have identified. If such mutations were associated with
increased risk for developing Alzheimer’s disease, this information would make us more confident that the mutated protein causes the brain cells in that region to be more vulnerable to Alzheimer’s disease. We already have one promising candidate protein that is present at much higher levels in resistant brain regions. We recently discovered that certain mutations in this protein are associated with the risk of getting AD. Our other approach is to use animal models. We use the really great tools that the Greengard lab has been developing for many years. They allow us to manipulate
the quantity of proteins in the brain of an animal model in any region we want to study. We plan to change the levels of proteins we have associated with vulnerability to see if brain cells become more or less protected in different animal models of AD. These two approaches will tell us which proteins are the most important for protecting or harming brain cells in AD. The proteins are likely to become very promising new therapeutic targets.

PYM:
What impact might your work have on Alzheimer’s diagnosis or treatment in the future?

Dr. Roussarie:
The ultimate goal of our work is to be able to prevent vulnerable cells from degenerating. If we find compounds that protect vulnerable cells, we could manage to stop the progression of Alzheimer’s symptoms if we treat patients very early on with these compounds.

PYM:
What directions can you see your work taking from here?

Dr. Roussarie:
We still need to refine our understanding of the vulnerability of specific brain regions in Alzheimer’s disease. Once we find the proteins responsible for vulnerability, the next step
is to find drugs that target these proteins. Given the decades of experience of the Greengard lab and the great expertise of its scientists, I am very hopeful that we will achieve our goals.