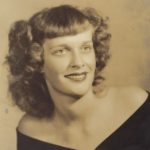 When Toni was born in Pensacola, FL on October 30, 1926. Her parents, and the world had no idea what a force she was to become…

Officially named Myrtle Antonia Dionne (MAD); she was the first child and name bearer of Myrtle and Antonio Ernest Dionne. The ultimate big sister, she went on to have six siblings, two sisters and four brothers.

As a Navy brat, Toni attended 23 schools before graduating. The Dionne family was posted to far flung bases. Toni recalled driving across country with Mother at the wheel to San Diego, where Dad was based.  She and the family took passage on a Banana Boat to the Panama Canal Zone, where she fondly remembered the butterflies.  Ultimately, her family, often divided by Naval maneuvers, spent time with relatives. Thus, one brother was born in Montgomery, Alabama another in Manchester, New Hampshire and on and on. Eventually they ended up bouncing from DC, to MD and VA together.

Toni shared  “Upon graduation from High School, I was informed that I wouldn’t be going to College… So I taught myself how to type and passed the Civil Service test and ended up at Washington National Airport with the 501st Air Wing… I ended up keeping track of all the pilot logs! I was the kid in the terminal but the crews were very nice! “

Flight was to be her destiny.  The daughter of a Naval Airman, she grew restless on the ground and answered a “Help Wanted” ad for Stewardesses for Pan American Airways. She was trained with 199 women in Coral Gables, FL for six weeks. Then they were all fired! But Toni and a friend met a gentleman who drove them to Miami, where National Airlines was looking for Stews. They were working that night!  he did return to Pan Am after 18 months. This was to begin a new chapter in her life.

“On one of my first trips a great co-pilot offered to carry my bag, but said that his brief case was heavier than mine! He was right and heʼs been carrying the heavy baggage for 56 years !

She married that co-pilot, Francis X. Duffy (still MAD!), and a storybook future looked certain. Their first daughter, Sharon was born in January 4, 1949.  A second child, son Francis Jr. was born November 23, 1949. Francis, known as Buzz by family, contracted polio as an infant and ultimately had quadriplegia.  Toni somehow found out about the Rusk Institute of Rehabilitative Medicine, in its infancy at New Yorks’s Bellevue Hospital, where Buzz became a life-long patient there.  She and FX Sr. fought for inclusion in schools for Buzz (from Elementary to Columbia University) and together with an architect, designed a barrier-free home in the early 50’s.

Daughter Denise came along in 1954, followed six years later by Thomas Patrick. The unique problems of having a disabled son in the ‘50s, ‘60s and 70’s did not stop Toni. She was an average housewife in many ways (think Toll House squares and Irish knit caps). But in other matters she was an extraordinary advocate who showed grit and a do-or-die determination she passed on to her children. Advocacy for the Disabled finally caught up with her vision in the 80’s.

Toni always believed in giving back, and she volunteered all of her long years living in Huntington, NY. She was a force only Alzheimer’s could stop. She was beloved by all, and is deeply missed by her children and their families.

Fly On, Toni ! We suspect she is serving cocktails in heaven.

Thank you to Jamie Venezia for her moving post here! I read it to my husband and teared up. I am so glad Toni is still being an advocate on the other side!
Jamie Venezia
I am a college kid with a genetic predisposition to alzheimers and after a night crying on my boyfriends chest because of our beautiful but possibly sad future I decided to donate to help find a cure. After some research I found this website. My boyfriend immediatly told me to donate because he had a good feeling about it. A little more digging and I was hooked. I was browsing the site and found the memory wall and loved it. Then I saw your photo, it was beautiful, classic. I decided to read this page to that boyfriend, we loved it. Loved hearing about the co-pilot who became your husband, and your son, and how you became an advocate for that. It was a moving story. Thank you who ever wrote it, thank you Toni for living it.
-It takes a strong disease to take down the strongest of people like us.
Denise
Happy Birthday Mom! You would have been 91 today. Tom, myself and your Sister-in-Law Ann went to a mass at St Pats for you today. Would you believe there were no lights and no heat after ladt night's storm? It was beautiful when the Sun broke through the clouds and lit up all the beautiful stained glass in the Church.
Ann decreed you approved. We love you and miss you.
Denise
Denise
Thinking of you on our first Mother's Day without
you. It is Dad's birthday too. You are loved and missed.
xo #3
Sharon
A wonderful, sweet history, Denise. You've captured all her strengths. She was so lucky to have you and Tom so attentive for all these difficult years.

Donate in Memory of Toni Duffy