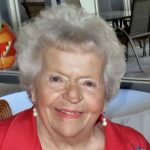 Shirley Ann McWillie Feeney was the beloved wife, mother, grandmother and great grandmother who had a zest for life and an infectious positive energy wherever she went. Shirley had a heart-warming, God-loving passion for family gatherings, making everyone feel special. She made every visit home incredibly fun and memorable.

Not only did she volunteer in service to others, she many times organized and led the events, including Girl and Boy Scout day camps, church fundraisers, and school activities and enrichment.

She and Dick shared a love of the outdoors, beginning their marriage with a treasured backpacking trip in the wilderness of Idaho. In the middle years, boating became an enjoyable family passion. They retired to a dream home in the mountains of Tehachapi, California. After ten years, they moved to Texas to help with young grandchildren.

Shirley was born and raised in San Diego, California, where she and Dick first met in second grade. They married in 1952 in La Mesa, and she graduated in 1953 with a degree in primary education from San Diego State.

As a military wife, she and her devoted husband Dick moved dozens of times and quickly became welcomed members of communities and churches in over 22 years of service.

Based on a profound and enduring dedication to God, family and community, Shirley brought the best of herself to her daily life and inspired many of us to do the same.

Shirley is survived by her husband of 66 years, Richard “Dick” Feeney, her three children, Cindy (Brian), Mark (Wendy) and Matthew (Vicki), and many grandchildren and great grandchildren. She is deeply missed by her family and a lifetime of friends, now living here in Texas and across the nation.

6 entries.
Sunyani Shabaka formerly John Wills
I knew both Dick and Shirley in Tehachapi, California. I retired and moved to Africa. Let me tell you what I knew about them both. With the US racial complexities Shirley embraced me like her son. As a African American I can testify that she knew no such prejudices. She was like my second mother. She looked out for me. Gave me advice. She was such a warm and loving human being. How I miss them both!
Dick was like my older brother. He and I talked about everything. He protected and shielded me from the racial hatred of others in our community. Since I was the only Black Man living there then. He was kind, intelligent and full of life.
Since 2008 I tried locating them with no avail. I Just learned of my mother Shirley's death.
Both Shirley and Dick are one of a kind. I love them and miss them immensely.
Carol Scher
Our deepest condolences to you and the entire family.

Carol and Les, Paula and Sarah
Tom & Nora
Our thoughts and prayers to all the family
Tim & Diane Morris
With deepest sympathy.
Janice Wagner
My condolences to you and your family.
Cindy
In honor of my Mom and all the great times we had together.