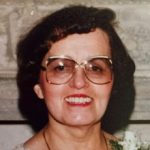 Mary Ann Bargerpassed away after a nearly 20 year battle with Alzheimer’s disease. Mary Ann was born in Antigo, Wisconsin to James and Marie Cavanaugh on August 12, 1934, but spent most of her life in Green Bay, Wisconsin. She graduated from Green Bay West High School in 1952, and received her Degree as a Registered Nurse (RN) from St. Agnes School of Nursing in Fond du Lac, Wisconsin in 1956. After nursing school, she married John Barger Jr., a math professor at the University of Wisconsin – Green Bay.

Mary Ann cared deeply about the mentally ill and elderly, and strived to optimize their living conditions, spirits and health.  She worked for about 30 years as a nurse, most of them at the Brown County Mental Health Center. In her later years she worked at nursing homes in the Green Bay area.

Mary Ann was a compassionate caregiver who loved animals; all things Irish; classic movies; the songs of Elvis Presley, Andy Williams and Frank Sinatra; the Green Bay Packers; and above all, her children, and her grandchildren.

2 entries.
Julie Barger Pallissard
Our mother demonstrated amazing strength and endurance. She was a widow for well over 30 years and lived alone in our big house and later in an apartment until she moved to Florida to be with her beloved son Johnny. She continued working in the rapidly changing medical field- even with those dreaded computers! And she struggled and lived well beyond the average life expectancy of most Alzheimers patients; she was fighting until she took her last breath. I read somewhere that “success in life comes not from holding a good hand, but in playing a poor hand well.” Well-played Mom.

It’s hard not to mourn for such a wonderful mother, grandmother, sister, cousin, nurse, and friend. But it’s impossible not to celebrate and appreciate her legacy- it’s here with us now and will always be present. MaryAnn is with us in our hearts and minds and the lessons she shared contributed to the goodness in all of us.
Mark J Garvey
Mary Ann eagerly welcomed me into her life when I married her daughter and joyfully welcomed our daughter into the world. She expressed that same happiness when my son was born. My fondest memories of Mary Ann is traveling through Ireland with my wife and daughter of 10 months. My daughter rode in the back seat with Mary Ann and had such fun. Mary Ann sang songs continually for my daughter. Mary Ann loved everything Irish so it seems fitting to insert a few Oscar Wilde quotes. May Ann's compassion as a nurse could be summed up with the quote, "We are all in the gutter, but some of us are looking at the stars." She really wanted people to see the beauty around us despite their life circumstances. Mary Ann's life concluded with a lengthy battle for her memory. As Oscar Wilde said, "Memory is the diary that we all carry about with us." I wish Mary Ann had been given more time to share her diary with my daughter and son.