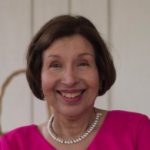 Born in San Antonio on an Easter Sunday, Maria has completed her task on earth and stepped into eternal life. Through the grace of God, she never stumbled.

Her Catholic faith never left her. She believed in participating in the ministries. She taught C.C.D. many years wherever she lived. In her last years, she was a Eucharistic Minister (EM), taking communion to homebound parishioners.

She also loved politics, was a social justice advocate, and enjoyed being a proud Democrat. She was passionate about classical music and the arts. She had a surprising and quick wit, as well as a beautiful laugh.

She was a second-grade bilingual teacher and, to her, teaching was a vocation and not a job. She earned a Master’s degree and commuted 50-70 miles a day from her home to the University of Houston at Clear Lake. She was mother to a daughter and two sons who all followed her example and earned PhDs in their fields.

She attended Christ the King Parish School and graduated from Providence High School in 1961. In 1966, she married Juan Huerta, and they moved to Freeport, TX, to start their life together, which lasted 53+ years until her death. They returned to San Antonio in December 2000. She retired in 2004 and enjoyed retirement by cooking, hosting family, spending time with her granddaughters, traveling, and—her favorite—dancing.

She was preceded in death by her parents, Eleuterio and Elena Gutierrez, and brother Guadalupe.

1 entry.
Melissa McCartney
Thank you, Maria, for the gift of my friend Marcos, and peace to Marcos and the entire family. You are all in my thoughts.

Donate in Memory of Maria Huerta