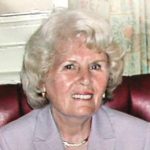 She was the beloved wife of the late Erich M. Schweikert; the couple had shared 55 years of marriage.

Born in Schwabisch Gmund, Germany, Irma, Erich and the oldest of their two children immigrated to the US through Ellis Island, NY and made their new home in Bergen County NJ and remained there until 1992. Irma and Erich then relocated upon retirement to Bucks County PA.
They travelled often to NJ to stay in touch with friends and maintained their connection with members of the Carlstadt Mixed Chorus for many years.

Irma made friends easily and was well loved and respected. As a devoted wife, mother and grandmother, she loved to cook, bake, sew and garden. Her family was always her priority.

Irma will be greatly missed by her sons, Erich F. and Gary E. Schweikert; her grandchildren, Elke, Erich and Kirsten, Peter and Brandon; her great grandchildren Sydney, Brooks and Zachary. She is also survived by her sister in Germany Lotte Schneider.

5 entries.
Werner Schneider, Germany
"He who lives in memory of his loved ones is not dead - he is far - dead is only he who is forgotten"

Dear Erich, dear Gary and all relatives,
In keeping with this cry of mourning by E. Kant, we will always keep Irma as a sister, godmother and aunt an honourable memory and we remember beautiful memories in Germany and the USA.

The news of her death has shaken us and filled us with great sadness.
For a long time we have wondered why she did not respond to calls from Germany. Now we understand that she couldn´t, because she had suffered from this serious illness and was therefor unable to do so. She is therefore even more in our hearts.

With these words of sincere compassion and condolences, we wish you dear Erich and Gary with your families, in this difficult time a lot of strenght and confidence.

In silent sadness and eternal memory of Irma,
Sister Lotte with Werner and Oswin and families.
Heide Webers
So sorry for your loss Gary and Erich. Tanta Irma was like a mom to me. Although we lost touch over the past several years believe me she was thought about often. I still have the Christmas china set she gave me and bring it out every year for Christmas and it always brings back a lot of happy memories of your mom and the great times we had in Carlstadt. She is now a true angel in heaven. Love Heide, Erika and Leo.
Kevin Barnes
Our hearts are saddened by your loss and our thoughts and prayers are with you.
Bodo Gieselmann, Germany
To Erich, Gary and all of the Schweikert family
Even regarding the long distance between our home bases there always was a link between our families based on the strength of Irma, Helmut, Benno and Lotte.
We will miss Irma as a lovely aunt with a lot of unforgettable memories in our minds.
Colm O'Callaghan
To Gary and extended Schweikert family

Our deepest condolences to you all. While I am sure your loss is huge I hope you get to celebrate a long life, well lived and a great legacy she leaves behind.

Donate in Memory of Irma Schweikert