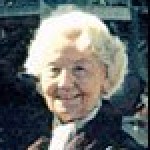 Elizabeth Fisher, born in Allegheny County, PA. Elizabeth had served in the USO during World War II, where she entertained over 157,000 troops overseas as a Ziegfield showgirl performing with Bob Hope.  She also volunteered to visit American troops who were hospitalized, and spent many hours at their bedsides.  She had a significant early involvement in the Veterans Bedside Network, a support organization for injured veterans.

For many years, Mrs. Fisher was deeply involved in charitable work alongside her husband, Zachary Fisher. She and Zachary were devotedly married for 54 years until his passing in 1999. Elizabeth was most known for her lifetime support and commitment to improving the quality of life for the benefit of members of the armed forces, veterans and their families. A tireless patriot, devoted volunteer, and generous philanthropist, Elizabeth honored our country by championing the causes of American troops and their families for more than four decades. As founders of the Intrepid Museum, she and her late husband, Zachary, gave New York and the nation a great American treasure.

Mrs. Fisher had been suffering from Alzheimer’s disease since 1990. Four years after Mrs. Fisher’s Alzheimer’s disease was diagnosed, the Fisher Medical Foundation joined David Rockefeller in providing $5 million for the Zachary and Elizabeth M. Fisher Center for Research on Alzheimer’s Disease at Rockefeller University. Through the establishment of the Zachary and Elizabeth M. Fisher Center for Alzheimer’s Research, she and Zachary became valiant leaders in efforts to conquer one of the most dreaded diseases of aging. The center houses the largest laboratory in the nation involved in Alzheimer’s research.

She was a great lady of tremendous courage, wisdom and compassion.