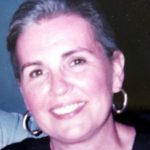 Ann Howard White published author, passed away on Saturday, March 2, 2019 at Charlestown Retirement Community after a long battle with Alzheimer’s; she was 76.

Born in Greenville, North Carolina in April 1942, she attended RJ Reynolds High School and was a soprano in the chorus. She married Edward Russel White, Jr., a local physician and began her family of three children. Ann later attended the University of Maryland at College Park and the University of Baltimore Law School.

In 1990, Ann became a published author and wrote four books for Harlequin and Silhouette Special Edition. An active member of Georgia Romance Writers, she critiqued numerous author submissions for the Maggie Award of Excellence, as well as served as the GRW’s president and later on the Board of Directors.

Always a loving friend, sister, mom and grandma she is missed. Rest in Peace; we miss you every day.

Donate in Memory of Ann White