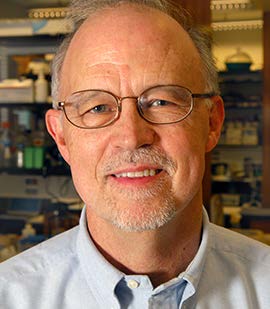 Sidney Strickland is Dean of Graduate and Postgraduate Studies and Vice President for Educational Affairs for The Rockefeller University. A scientist, research mentor, and academic leader, he also heads the University’s Patricia and John Rosenwald Laboratory of Neurobiology and Genetics, where he and his colleagues study the molecular mechanisms of nerve cell death and regeneration, with a special focus on Alzheimer’s disease.

Significant evidence indicates that Alzheimer’s pathology involves a vascular component, and many epidemiological studies have linked vascular diseases such as stroke and atherosclerosis with an increased risk of the disease. Alzheimer’s patients often have deposits of the peptide beta-amyloid in blood vessels—a condition called cerebral amyloid angiopathy, which provokes degeneration of the vessel walls and affects cerebral blood flow. Dr. Strickland is at the forefront of research on the role of vascular factors in Alzheimer’s disease. His work is elucidating how biochemical interactions between beta-amyloid and fibrin, the primary component of blood clots, may lead to the neurovascular damage seen in Alzheimer’s patients.

Work under way in the Strickland laboratory is also shedding light on stroke, multiple sclerosis, traumatic injury, and other conditions resulting in the destruction of nerve cells. This research offers insights into the treatment of nervous system pathologies, including the design of stem cell therapies and other novel strategies to promote regeneration of nerve cells.

Dr. Strickland first came to Rockefeller University in 1973, after earning a B.S. from Rhodes College, in Memphis, and a Ph.D. in biochemistry from the University of Michigan. In 1983, he left for an appointment as an associate professor at the State University of New York at Stony Brook, where he was promoted to full professor in 1987 and appointed Leading Professor in 1996. At Stony Brook, he also served as director of the program in genetics, as well as associate director of the Institute of Cell and Developmental Biology.

A former John Simon Guggenheim Fellow, Dr. Strickland received an honorary doctor of science degree in 2006 from his alma mater, Rhodes College. Also in 2006, he and his daughter Eliza Strickland published The Illustrated Timeline of Science: A Crash Course in Words & Pictures.